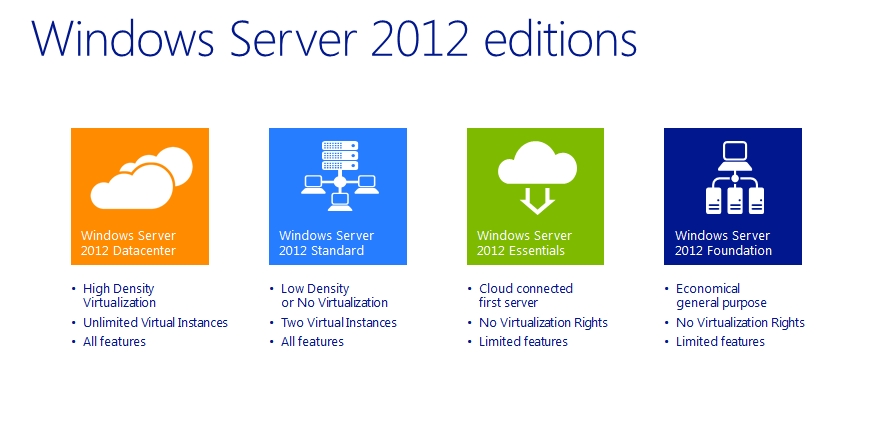 Which version are you using? And do you know why?

Standard provides all roles and features available in Windows Server 2012 R2. Supports up to 64 sockets (CPU) and up to 4 TB of random Access memory (RAM). It also License two virtual machines.

DataCenter also provides all roles and features available in Windows server 2012 R2, but includes unlimited licensed Virtual machines that are running on the same hardware. DataCenter supports 64 sockets, 640 cores and up to 4 TB of RAM.

Foundation is for small businesses and allows only 15 users. Cannot be joined to a domain and includes Limited server roles. Supports one processor core and up to 32gb of RAM. It is a good option for smaller business that doesn’t need anything more.

Essentials used to be Small Business Server, but it is available as a Server Role in an existing domain or as a core Windows server edition on a Virtual machine. It doesn’t have Hyper-V itself, Server core or Remote Desktop Services. It is Limited to 25 users and 50 Devices. Supports two processor cores and up to 64gb of RAM. Essentials have received New features like Client Deployment, User Management, Storage and Data Protection, and an Office 365 Integration for Object, Password and License synchronization.

Hyper-V Server is a stand-alone Hyper-V host for Virtual machines. As it is only a Core, there is no License cost for the host operating system, but Virtual machines hosted here is licensed normally. Suited for a smaller farm of Virtual machines, where the DataCenter License can be more expensive.

Storage Server WorkGroup is a entry-level unified Storage appliance With a limit to 50 users, one processor core and 23 gb of RAM. It supports domain join.

Storage Server Standard supports 64 sockets, but is licensed on a two-socket, incrementing basis. Supports up to 4 TB of RAM and includes two Virtual machine Licenses. Supports domain join and a phew roles including DNS and DHCP Server roles, but does not support others like ADDS, ADCS and ADFS.

MulitPoint Server is a New Word for Terminal Server, and Standard Version supports multiple users whome Access the same host computer directly using a separate mouse, keyboard and monitor. Limited to one socket, 32gb of RAM and Maximum of 12 sessions. Supports some roles like DNS and DHCP, but not ADDS, ADCS and ADFS. Does not support domain join, and Microsoft says it is typically used by educational institutions. Premium is Limited to two sockets, up to 4 TB of RAM and a Maximum of 22 sessions. It supports domain join, bu the it is not Server 2012 R2, only Server 2012.